Allen Haff and Ton Jones took a trip to Germany this fall.

The last time we saw them on the show, Auction Hunters, Ton had walked out on Allen.

Does a trip abroad indicate the Haff-Ton team has reunited and are now global auction hunters?

Well, don’t know if they will conquer the world in their bread truck, but both stars were in Düsseldorf together.

Allen has confirmed on Twitter that Spike TV will air thirteen new episodes of Auction Hunters in January.

What were they doing in Germany?

Allen went to Burger King. Wait; give me a minute to explain. Germany’s Burger King isn’t quite like the American franchise. Allen ate foie gras (liver of duck or goose), caviar (salt-cured fish-eggs), and schnitzel (thinly pounded breaded meat cutlet). He also had a killer salad. Why do the European fast food look more like restaurant food?

He’s a steak and potatoes manly-man. Take a good look at the size of that STEAK! Enough to feed all of Taiwan. No, this wasn’t served at Burger King, but Allen called it “Fred Flintstone steaks.” I would imagine a cave man could eat a steak that size without a problem (not saying that Ton is a cave man).

Allen Haff and Ton Jones stayed at a very “modern” hotel by the river. I know the hotel looks like art more than a hotel. And they did go about town hoping to blend in with the people. Ton somehow doesn’t quite blend in, ya think?

Allen did confirm he attended an auction in Germany, but was not specific to the type of auction. Maybe come January we’ll see the Haff-Ton team drive their bread truck down the Audubon to hit a storage auction. Now that would be worth tuning in to see.

Do you think Auction Hunters will air an episode or two set in Germany?

Please leave your thoughts on this blog in the comment box below.

Yes, the show is scripted. Both Ton & Allen are actors, and according to reports, the “Haff Ton Pawn Shop” isn’t really open for business. 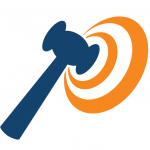 lovejoy – Yes, the show is a “scripted reality” where each auction is staged and the host are actors, not storage auction hunters. It’s fake but entertaining.