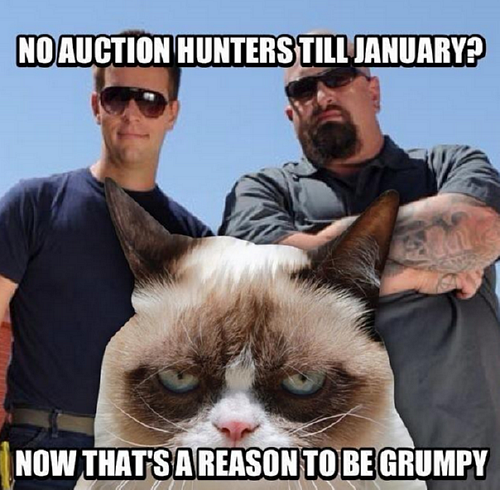 Auction Hunters will return for a “fifth season” which will premier some time in January, 2014. I hear your groans, but I’m just the messenger.

Allen Haff has been asked on numerous occasions by fans of the show when the storage auction reality television series would return on SpikeTV.  Allen finally tweeted on his Twitter account that he and Ton were informed that Auction Hunters will return at the beginning of the next year.

Keep in mind that season four of Auction Hunters premiered on January 30, 2013.

If you are unfamiliar with the show’s premise, it’s simple: Allen Haff and Clinton ‘Ton’ Jones participate in storage unit auctions across the US, and that only their rarest and most valuable finds were presented on the show. Last season, however, they traveled primarily in Southern California. 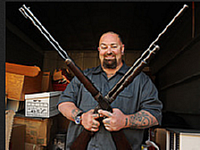 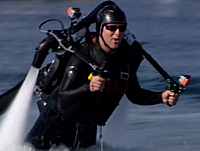 In season four, the duo opened a pawn shop and hired three new employees, who by the way, had very little air-time on the show. No clue if they will continue with that storyline or not.

The Auction Hunters: Pawn Shop Edition did not go over well with the fans. The series was more intriguing when Allen and Ton were on the road cruising along in their bread truck with a mission to find that next awesome treasure inside a storage unit.

In the last episode of season four titled, “The Fall Guys,” the cliffhanger left a rift that severed the Haff-Ton relationship. Ton called it quits and walked away from Allen…

When Auction Hunters returns in January, will Allen and Ton repair the rift and mend their bro-bond; or will they emerge as fist-to-face frenemies?

Please leave your thoughts on the upcoming new season in the comment box below.

Grow up,its the best show on tv.So stop nagging each other and get buying.

Chad – Everyone is entitled to an opinion.

I was just wondering if the show was coming back. Now that I know that it is coming back I feel relieved.

Travis: I am not sure the exact “date” but once I know, I’ll be sure to let all the fans know.

Great to finally hear when the show will air again.

Doug: A lot of fans are waiting for Allen and Ton to return so hopefully they’ll give us a date soon.

Love this show and so glad they are coming back which sounds like we will see both and hopefully they are still partners. They are crazy at times but with the opening of their shop tension was high to bid well and fill the shop up Ton made a huge bid that Allen called him on and Ton got totally upset…. buddies are buddies and what is …is… so can’t wait to see them back on the road together and updates on the shop.xoxo

My husband and I can’ t wait to have it where we get to see Ton & Allen coming back to Auction Hunter’s. There show was always a good fun show to watch, and informative also. It will be great to see you guys again for sure.

Gina: Expect 13 new episodes to start in January. I enjoy the trivia on the show.

I don’t think the guys have to fight ac other or other biddrs. I watch to see the items they find in the units. The bad-mouthing of others or bidding others up is distracting to my enjoyment of the show

Carol: It’s just part of the show, I suppose.

Can’t wait till the show airs again. I like watching this show, friends can make peace, I think they can.

Lucas: They’ve made peace, they went to Germany together, so all is well!

I love this show and hope that the fight was made-for-TV and not real. So glad they are returning for a 5th season.

New season starts on Jan 4th oh and thanks for using my Grumpy Cat picture from Allen’s Facebook page.

AWESOME! This is the greatest show and I have been waiting to hear that they are coming back. They are truly missed!

Susan: I enjoy the trivia on the show. Look for 13 new episodes beginning January 4th.

Love this show….so glad it is coming back….

Karen: That’s great! Keep coming back for more info on your favorite shows.

Glad to hear they are coming back. Had a Step Van like their bread truck made into a camper. Hopefully they bring Carolyn back too, though I like to see what they find in the storage lockers; she was better to look at then two guys. No offense guys, she’s hot.

I’m a big fan of the show. It’s interesting, educational, and funny. Can’t wait for new season. One of the best storage auction shows on tv.

Jason: I believe it’s one of the more “entertaining” shows, but not necessarily a “reality” show. Glad you enjoy it. Keep coming back for recaps of the new season.

The Hispanic chick that’s coming on now.. Is she Allen’s girlfriend? She might hurt ratings.. We women don’t like to see a Hispanic women dress like she does looks cheap

I don’t think she an Allen are dating, but I guess anything is possible.

WHY DID THEY EVER BRING BACK THIS SHOW “IT STINKS”

THE ACTORS ARE ROTTEN “YES ACTORS THIS SHOW IS FAKE”

PLEASE WAKE UP AND REMOVE THIS SHOW