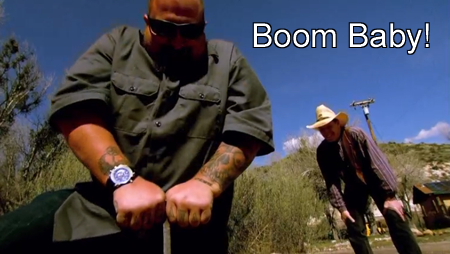 The Haff-Ton team headed to Rancho Cucamonga, CA, a place popular with newbie bidders and where Ton first learned the hopes of auction hunting.

Fact: Rancho Cucamonga is named after the Kucamongan Indians that settled there around 1200 A.D.

There were three units up for auction and in a place like Rancho Cucamonga, anything could be in them, so the guys were definitely excited to start the bidding.

They paid $250 for a unit with an antique tr

unk that really grabbed Allen’s attention. The unit also had several other boxes, some art supplies, metal racks and hangers, as well as a pro speaker and equalizer set worth $500.

Allen was very impressed with the trunk, saying it was from 1800’s, and speculated that it might have been a captain’s chest.

Fact: Many crews deserted their ships to join the California Gold Rush in the mid 1800’s.

The chest even had some secret compartments and drawers, inside of which they found a 1970’s costume watch worth $60 and lots of silver jewelry.

Fact: The melting point of silver is 1763 degrees Fahrenheit.

Since the jewelry would be worth more melted down, Ton got to have a little fun with his electric melter.

Fact: Electric melters can be purchased for around $650.

They melted it, turned it into blocks and then marked them. They ended up with $600 worth of silver.

Fact: “Hallmarks” are struck into precious metals to identify the foundry of origin.

They took the trunk to Yvonne, an antiques broker. She said it was from 1890’s and was an Anglo-Indian trunk and probably used by a merchant in India. She brought it from them for $450.

Allen and Ton bought their second unit for $925. There was a 1

930’s dresser inside, a weight bench, boxes and containers, an old mattress and a bunch of books and trash.

They spotted a mining tray (also called a sluice box) that was worth $100, but that was only the beginning of the gold mining equipment they ended up finding.

Fact: A gold nugget weighing 160 lbs was found in Calaveras County, California in 1854.

Inside an old cedar hope chest from the 60’s that was worth about $200, they found an Austrian made scale. It was very accurate but not overly common for prospectors, who would usually just take their gold to an assay office. Often, they got cheated.

Fact: An “assay office” is where precious metals are tested for purity and certified.

Then they found something that really made Ton’s day. A blasting machine, made by the DuPont company in the early 1900’s.

Fact: The DuPont Company was founded in 1802 as a gunpowder mill.

They took all the mining equipment to Rusty, a gold mining expect who r

uns prospecting workshops. Of course the blasting machine would be worth more if it worked, so they hooked it up and while Allen helpfully tooted the warning horn, Ton blew up some earth.

Fact: U.S. blasters use over 6 billion pounds of explosives each year.

Rusty bought the whole collection of mining equipment for $4000.

From melting silver to prospecting for gold, the Haff-Ton team certainly had a profitable day.