Auction Hunters: The Most Dangerous Game 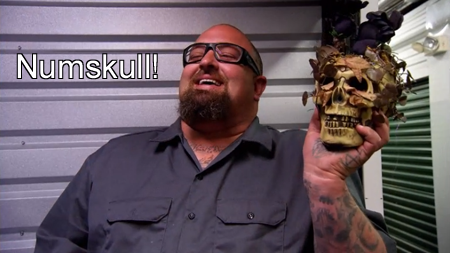 Allen and Ton drove down to Orange County, California. What used to be all orange groves is now a very wealthy neighborhood where storage auctions promise big ticket items and a large crowd of bidders.

There were only three units up for auction, and so many people that during one bidding the auctioneer couldn’t even see Allen. But Ton and Allen won the third and finale unit and hoped to find some exiting things inside.

Fact: Over 115,000 millionaires live in Orange County, one of the riches places in the US.

When the third unit was up for auction, the Haff-Ton team spotted a shotgun inside. Unfortunately so did the auctioneer who removed it from the unit, meaning all the other bidders knew it was there. When an auctioneer sees a firearm in a unit it’s his responsibility to confiscate it until it can go through a dealer, if it’s not stolen it’ll go back to whoever buys the unit.

Allen and Ton paid $2200 for the unit, hoping where there’s one gun there’ll be more.

There were lots of Rubbermaid totes inside the unit, many of them filled with old costumes and some stuffed animals. There were boxes of old computer parts and some toys. Ton took a skeleton motion sensor for his front yard.

They found a vintage dining set, but it wasn’t of the highest quality and only worth about $40.

Then Allen found a Hoof Lamp worth $75. He was definitely disturbed. The

hunting theme continued when Ton pulled out some bow hunting gear from a box worth $180.

Afterwards they found a second shotgun, a 16 gauge. Inside a box they found even more guns; two Benelli shotguns, which are some of the best hunting shotguns money can buy.

Things took a turn for the bizarre when they pulled off a tarp and found a full sized stuffed mule deer and ram.

Fact: An average mule deer can weigh up to 500lbs.

While they’d made some big finds in the unit, they weren’t sure if they’d be able to sell either the guns or the animals.

Since they’d have to spend money to get the guns checked out, they could easily end up losing a lot of money on this unit.

With the auctioneer, they took the seized gun to a dealer who ran the number

and said the gun checked out. It was a 1967 Canadian Centennial Gun and never fired. The dealer was a fan of the gun and so bought it from Allen and Ton for $500.

They took the other three guns to Tim, a gun expert.

Fact: The Winchester Model 1897 is one of the first pump-action shotguns and was us

It was a little loose inside so it would be a little more dangerous to shoot, but if it fired it would mean more money, so Allen cheerfully volunteered Ton. Nice.

The gun shot great, and Tim bought all three weapons for $2000.

Next the Haff-Ton team took the two animals to Gil, a Taxidermist expert.

He told them the mule deer is a desert animal often found in Mexico.

The size and points on this particularly mule deer, made it worth even more.

Fact: The outside of the spread of a Mule Deer’s antlers can reach up to 4 feet.

Gil also identified the other animal as a Desert Bighorn Sheep, also found in Mexico and costs $6500 to hunt. He explained he could tell this one was a wild animal based on the size of its err…‘private parts’.

Fact: Competitive mating causes this sheep to have larger testes then its domesticated counterpart.

Despite laying a lot of money on the line for what turned out to be a risky unit, the Haff-Ton team definitely made a killing!