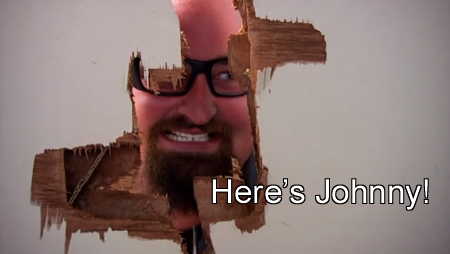 Allen and Ton decided to drive to an auction in Chicago. It’s a town with lots of history. Excitement bubbled as the duo expected to find collectibles.

Fact: Chicago is the third largest U.S. city with a population of 2.7 million.

There were eight units up for auction. Duo had a worth opponent when the first six units were taken by Chicago Charles. He’s a local who does not put out the welcome mat for out-of-towners. Haff-Ton team managed to snag the last two units away from him.

Allen and Ton paid $500 for a unit with some furniture and old army footlockers. They found a hand painted anatomy model. Creepy but at least valued around $180.

Then it went from creepy to morbid. Haff-Ton team fround a casket in the back of the room. Duo surmised the three reasons why someone would default on a storage unit:

With a little trepidation they opened the lid. AAAAAAHHHH! Just kidding. The casket was empty. Though they felt awkward as they carried the casket out of the storage unit. Duo took the casket to Adam and Skye, experts in vintage oddity pieces. That has to be an interesting job.

The burial casket was made of tin. Adam and Skye could tell from the laurels and cherubs it was from the Victorian era.

cheaper casket. This particular casket was never used for burial, which meant it held a lot of dead bodies during ceremonies.  Creepy.

The casket would have to be restored for greater value. Adam and Skye bought it for $1500.

They bought their second unit for $500. It was full of brooms, boxes, tote bags, a few sports items, and tools. Ton excited when they spotted an ammo box; but it was full of garbage.

They did find a lot of interesting firefighting memorabilia such as a Fireman’s carry ax. Ton hacked up an old worthless door. Yes, he had fun!

Haff-Ton team discovered old firefighter parade helmets from the Rainbow Volunteer Fire Company which were made of leather. They were worth about $1000.

Fact: The Rainbow Volunteer Fire Company was founded in 1773.

Next firefighter item was two fire extinguishers worth $200 apiece. Both dated around the time of the famous Chicago Fire.

Fact: The Great Chicago Fire of 1871 burned over a third of the city to the ground.

Last fire extinguisher was more commonplace. It didn’t have much value. The logical thing for the duo to do was to set something on fire and use the extinguisher.  I said it was their logical, not good logical.

It would have belonged to a high ranking officer and was worth $1,200.

They took all the firefighting gear to Frank, a firefighter memorabilia collector. He paid them $5,800 for everything.