Jarrod and Brandi: Married to the Job Recap 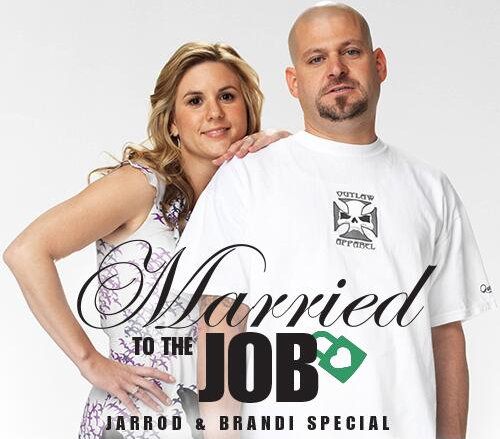 Jarrod Schulz and Brandi Passante granted their fans access to their lives at work and at home in an A&E special:

Married to the Job.

Inside their two-story home (without a white picket fence), two kids, one dog…

Jarrod (grown child) badgered Brandi for another birthday party. His mother created a Schulz tradition of the “birthday 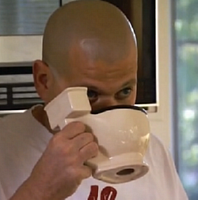 month” when he was five-years old. A month-long birthday celebration?

That’s every kid’s dream.
Jarrod’s not a kid.
Wait, hold that thought.
He drank coffee out of a toilet cup.

Their son Cameron (real child) struggled with Alegbra.
(You know, that math that you will never, like ever use again in your entire life.) 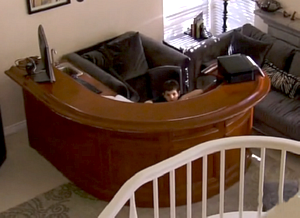 Cameron needed a desk to do his homework. Jarrod’s solution – get him a desk from the store.

Brandi: We have a rule Jarrod. We’re not suppose to bring stuff home from the store.
Jarrod: Well, it’s more of a guideline than a rule.
Brandi: Pretty sure it’s a rule.

He brought a BAR to use as a desk from the store.

And men wonder why women have PMS.

Brandi’s voiceover intro to the special:

I met Jarrod when I was nineteen. And even then, he didn’t have hair. And then came Oops. And Oops again. They’re pretty cute, so we let ’em stick around. We lived with Jarrod’s mom for awhile. Something every girl dreams about. And then one day we went to a storage auction. And our lives changed. We opened a thrift store, so Jarrod could hire all of his dumb ass friends. Because, of course they didn’t have jobs. People say that a successful marriage, takes a lot of hard work. But let me tell you, even when you’re not married, it still feels like a full-time job.

Meanwhile, at the Now and Then thrift store… 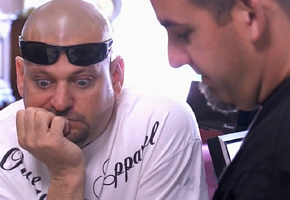 Jarrod stated he worked 7 days a week, 11 months out of the year.
He needed his birthday month to detox.
Ready to bolt out the door.
But Shawn, his brother-in-law, advised him that they needed to discuss expenses and payroll.

Schulz displayed the enthusiasm of a bewildered rugrat (just go with it).

Back at the home front…

Perplexed as to why there would be letters along with numbers in math… Brandi told her son to “Google it.”

Brandi: I’m not sure what I would ever do if they shut down Google.

Welcome to Parenting101 in the 21st century.

Jarrod urged both his son and daughter to finish their homework.

Jarrod: Cameron’s gonna have to learn there’s always gonna be homework. But birthday month comes only once a year.

So far the grown child has had two or three birthday parties (dang!).
Schulz wanted M-O-R-E!

Brandi: With anyone else, birthday month would scream “Mid-life Crisis.”
But with Jarrod, it means he still hasn’t grown up.

Off to Grandma Sue’s house… 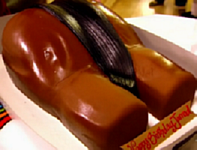 Honey-baked ham. Cheesy potatoes. Beans.
Was it enough?
Uh, no.
Jarrod whined for another birthday party and cake.

Brandi gave him cake alright… shaped as a horse’s ass!

Brandi: As a mother I have two goals:
Make sure that the college money doesn’t turn into bail money;
And to make sure Cameron doesn’t turn out like Jarrod.

High goals for any mother (ahem).

At a local bar… 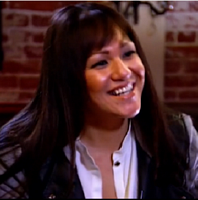 Christina, saucy-single-brunette and best friend to Brandi, suggested a tutor.
Not for the kids.
For Brandi.
Best friend even arranged for the interviews.

Christina suggested that Brandi hire a super-banging HOT tutor. Brandi cocked her head. Uh, wait-a-minute. Was this interview for a tutor or speed dating for Christina?

Back at the home…

Jarrod stole his mother’s free-standing pool (she was glad to part with it).
He set up the pool with his dumb ass friends (Brandi’s words, not mine) in front of his house.
Bought a keg. Hired a DJ. Catered food. Girls in bikinis. PAR-TAY!

Time to ring up Brandi.

If you can’t beat them, join them. Brandi did a hand-stand on the keg and drank beer. She even got-jiggy-with-it. 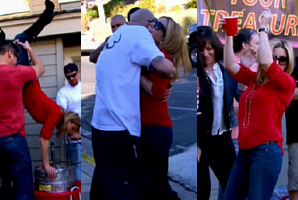 Until rent-a-cop busted the party.

Jarrod: I really screwed up.
While I was running around acting like a kid, my kids needed me to be a dad.

What about his daughter Payton?
He had her plunge the toilet at the thrift store.

Welcome to Parenting101 in the 21st century.

Please leave your creative and fun thoughts about the special in the comment box below.

Will not be watching another episode of a lame TV show…….please give us a break and air something either funny or educational