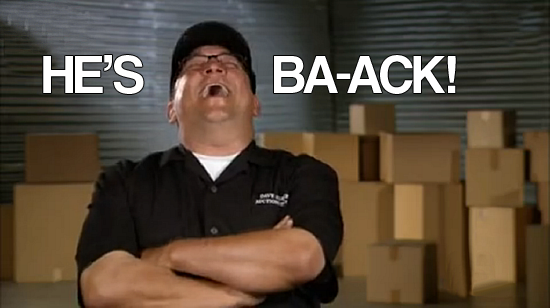 Definition of Hester Poltergeist: All of the above and – OH, HELL NO!

The Mogul – wait, hold that thought. Can Dave Hester still be called a Mogul when he closed two stores and lost respect of his colleagues (not sure he ever earned their respect)?

Definition of a Mogul: An important or powerful person.

He arrive at auction, not in his former huge box truck or fleet of trucks; but instead in a black van to the tune of Darth Vader music. 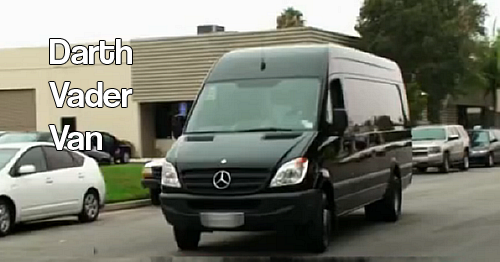 That’s quite a slap to any Star Wars fan for the Sith definitely had more class than this outcast reality star who was absent during seasons 4 and 5 of the show.

Response of the cast:

Laura: What was that?
Jarrod: (mouths – WTF) I hope he’s not staying. Any lowlife will do, huh?
Laura: Why would he even show up?
Brandi: No shame. No shame.
Jarrod: Are you kidding me right now?
Brandi: I’m not kidding you.
Laura: I just got like throw up in my mouth.
Darrell: It’s a boy named Sue.
Dave: How do you do. 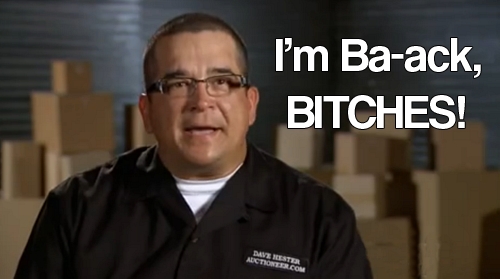 Brandi: I heard he tried to start his own auction company. Must not have worked out too well if he’s crawling back here.
Jarrod: Tried to open an auction company – failed. Had a shop – failed. Honestly, I heard Dave was living in his van.
Darrell: I don’t know where Dave’s been. Probably ‘Donut Rehab.’ But I wish he’d go back.

Dave’s presence caused quite a disturbance among the regular bidders. Laura not too happy for she had to take on the role as auctioneer as her husband Dan was out of town.

Hester’s response to the chatter so vile against him?

Dave: These guys have been getting a little soft around here without me. It’s time to remind them who’s in charge.

Hold that thought, Hester, because you will see who was truly in charge.

Laura: You know what, we’re gonna make lemonade out of these rotten lemons today, folks.
Please help me to hold my tongue and not lash out at that beast.
Brandi: I wonder how it feels where you are so rampantly just hated so badly.
Darrell: F—ing ridiculous.
Brandi: F— this. This is not okay.
Jarrod: We’re all going to Hell.

So far so good.

I wrote too soon.

Laura: This guy is running all over town, calling himself an auctioneer. Trying to steal my business. Now he shows up at my auction. 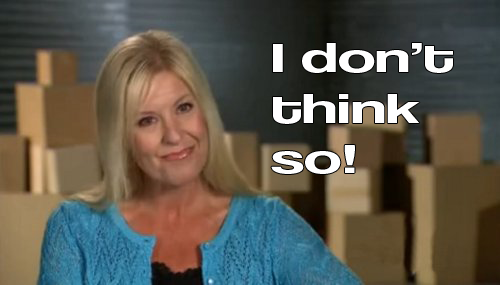 If only it would stop there. 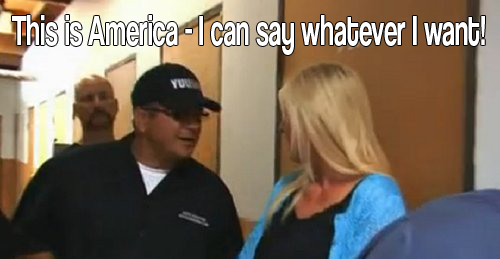 Laura: You can say what you want absolutely, but you do not have to discredit me or put me down in any way, or say you’re gonna take my accounts.
Dave: Go away.
Laura: I think you are a little baby on showing up on a day when Danny’s not here, and you haven’t been around forever, and then you’re gone. Well, I’m gonna let you know I’m the only auctioneer here.
Dave: Yeah, go see a psychiatrist. If you want to scold me, send a man to represent you.
Laura: You think you’re gonna make me feel like a little girl. Guess what? I’m the Lady here and you’re not gonna get in my way.
Dave: Are you done?
Laura: Yeah.
Dave: Okay, now shut up. 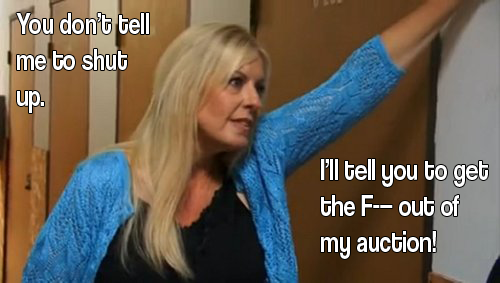 Hester Poltergeist now in full swing as malicious words spewed out his mouth to piss people off – what he does best, yes?

More words were exchanged between Laura and Dave (not pretty). Here’s a snippet.

Dave: Get out of my face.
Laura: I’m not afraid of you.
Dave: What a piece of sh–!
Laura: You want to be at my auction, straighten up. 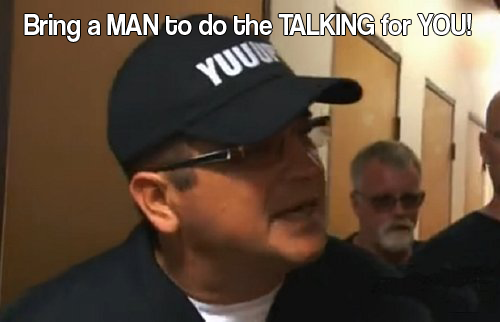 Laura: Is that what you think I need?
Dave: (Bleep) and a mouth don’t make an auctioneer.
Laura: At least I have a pair. Do you know what I have? I have backbone. I have bravado. Do you hear me? You’re gone!

Security escorted the ex-mogul out of the premises.

I told you to wait for it.

Dave was not in charge as he boasted at the start of the show.

The auctioneer – LAURA – was in charge. 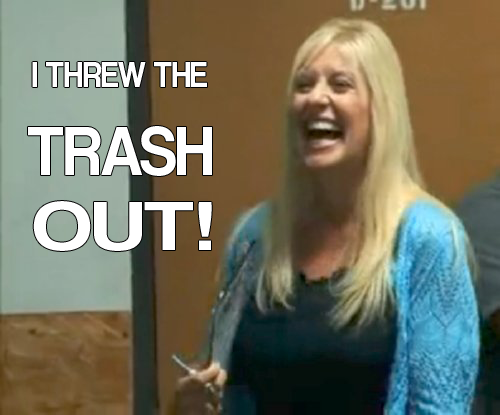 Dave excited that he twisted that auction into something ugly.

In the end Hester stated he was a NICE guy.

What were his last words, you ask?

Not a bad idea.