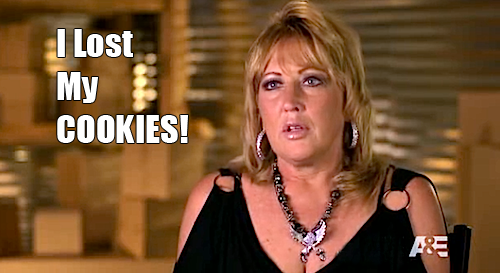 Lesa and Jerry rearranged the newer items in her store. Feeble attempt to class up the joint. Bubba and Ricky made the long haul in 100°F Texas heat. Hope they buy a locker or sweat off a few pounds (now don’t you say it).

Victor eager to make up for his last auction bust.

Victor: I’m finding that one expensive item, and I’m burning the rest… pirate–style.

Yeah, go with that philosophy Vic and see how much it will profit you. Moe absent as he had a surgery to perform.

Toys and a few shabby looking bedroom furnishings. Not much to the naked eye.

Lesa grabbed it for $500. Aside from the dresser, she found clothes and more clothes.

Enough clothes to start a thrift store. No wait, she has a store!

Jerry: The previous owners got to be naked, ‘cause all their clothes are right here.

Jerry: I’m sorry but a cookie jar ain’t gonna get anybody into her store.

Expert also stated that the Davy Crockett cookie jar was the real McCoy. Valued at over $900.

Appraiser then asked Lesa if she could bring him some cookies next time. Lesa promised to bring her ‘cookies.’

Yikes. Even worse than the first locker. A sketchy leather couch, dirty mattresses, and a dryer with the door held shut by a screwdriver.

Ricky: That mattress looks like someone was killed on it.

Victor snatched the locker for $325.  He dug inside and discovered a knight’s helmet, a chain mail shirt, and a sword.

He took his costume over to Medieval Times where he was greeted by a ‘knight’ (employee) who addressed Victor as “My Lord.”

Where’s a  ‘PLEASE DO NOT FEED THE EGOS’ sign when you need one?

Employee valued the costume medieval merchandise at $600. The knight also let Victor know the chain mail shirt was especially impressive as all the ringlets must be strung together one at a time.

Victor took advantage of his new found knighthood as he stuck around for a free dinner and show.

Bubba and Ricky went home empty and hot. Bummer. Meanwhile, Moe made it over to a hoarder’s unit he bought earlier that day for $550.

Everything under the sun: stove, baby strollers, and a giant stuffed monkey.

Moe wondered aloud what he could use the stroller for.

Moe: Maybe it’ll be good for my monkey?

However, it was the sit down MS. PAC MAN video game that caught Moe’s eye. He took it to a bar which housed ‘old school’ video games. A tense moment as Moe and the owner waited for the game to boot up.  Luckily, it did.  Owner valued the game at around $1,200.

Moe: That’s a lot more than I thought I’d get.

What is your favorite old school video game?