Storage Wars: Canada: The Hot and The Weird 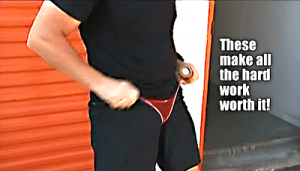 The heat wave was in full effect. So much so, it was affecting people’s thinking.

Cindy brought her hand fan. She knew the heat made people a little crazy, so she planned to stay cool. Rick thought it might be a good strategy for them to bid some people up, and really get people agitated.

Roy brought his lucky flashlight. He’d gotten a few bad lockers and needed a good one this time out.

Paul and Bogart were already sweaty from putting up their store sign. They didn’t have much money to bid with, so they had to bid smart.  Bogart let it be known: He was NOT lifting anything in this heat.

Ursula also needed a big win, but today the weather was not on her side.

Everyone seemed to be taking a pass on this one. But Paul looked interested…

Paul: If it goes cheap enoug-

Bogart: Don’t even think about it!!

And Paul grabbed it for the low and very LONELY bid of $10.

Once they opened it back up, Paul realized just how big the TV actually was.  Bogart knew exactly how big that TV was. And how much it would hurt his back.

Bogart found a small box filled with odd-looking utensils. Paul declared they’d just made all their money back from these things. Although neither of them knew what they were.

They took them to a medical antiques dealer named Nancy. She said they had found medical tuning forks, (for an Audiologist) used to test people’s hearing.

And then Nancy showed the boys some REALLY unique items of her own.

An old metal device placed in the penis, which shot Mercury up inside to treat STDs and syphilis; Some old condoms made from sheep intestine (reusable); And an enema pump from 1885.

Nancy let them know they could get around $200 for their tuning forks. Not bad for a $10 investment. Paul showed Bogie the old man still got it.

A larger unit: old cabinets, and a couple of electronic items. It was questionable at best.

Ursula and Roy looked interested. Rick and Cindy were going to pass.

But that didn’t mean they wouldn’t bid these other guys up.

Before the bid started, Roy offered Ursula some pink ladies g-string panties he had found in the storage facility earlier in the day.

Ursula: Roy, we all know they’re yours.

And so Roy put them on.

Ursula: The heat is crazy today, but Roy is insane.

Cindy pushed the bidding up, but it was Roy who walked away with the locker for $350

Cindy: That should get his panties in a bunch.

Roy tossed his panties at Cindy, which didn’t sit well with Rick. The Rickinator does not play that way. Not in this heat.

Inside the unit, Roy found nothin’ but garbage. And it was his job to clean it all up.

Roy: Why today, of all days, do I have to get a worthless locker?!

Roy did find what looked like a radiation detector. He was hoped it might be worth something.

Roy took the Geiger counter to the Nuclear Research Department of McMaster University. There, a radiation specialist told him his counter was, at best, worth $100.

Roy: I feel a meltdown coming on.

The heat had beaten up on everyone as they moved to the last locker of the day.

Eh. A washer and dryer… and too many mattresses.

Everyone looked like they were going to take a pass on this one, including Rick and Cindy… especially since the bid opened up around $200!

Cindy was horrified. Rick was confused. And Ursula and Roy were in hysterics.

Cindy: I can’t believe I made a rookie mistake like that.  F–k this fan!

But as Cindy and Rick dug into their accidental purchase, they began to add up what was inside. Maybe Cindy’s mistake would pay off after all?

And a box of nice pottery jugs could be the cherry on Cindy’s boo-boo.

They took the pottery to specialists who let them know they could get $600 for one of the pieces.

Cindy: I told you my jugs were worth money.

Ursula left without a locker but that was okay with her. She was just happy to get out of the heat.

Cindy screwed up, but it ultimately paid off. Have you ever done something stupid which ended up paying off?