Ricky and Bubba were looking for big lockers that they could “turn and burn” as they needed to make a down payment to expand their business. Mary didn’t have cash to burn, instead she asked Jenny to spot her money. She was broke. Jenny a bit irked because the point of the partnership was to pool money together.

Then there was the new player. Kenny Stowe (aka Santa Claus) without a giving nature.

Bubba: He claims to turn trash into cash but in reality, it’s the other way around. 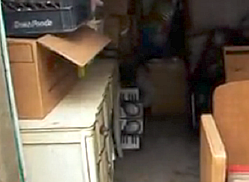 Mary: You know what? It’s pretty nice having a Sugar Mama.

Jenny found a duster and proceeded to dust Mary; that freaked her out. Who

knows where that duster has been! Outside of the obvious they did find a vintage poster printed back in 1973.

It was a propaganda poster for the Russian election. Translation – “We voted for the future of our Motherland.” Poster valued at $250.

Mattresses, furniture, fan, weed-eater, boxes, and quite a bit of household items.

It was lackluster and guess who won?

Seriously not going to get into all of the items that Kenny found in his four lockers; however he did discover a mini lathe. Machine used to mold wooden legs for sofas, tables or chairs. Valued at $375. 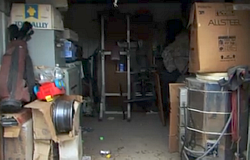 As they enter their storage unit they immediately saw a 5 ton air conditioner. As they continue to dig they found a heater, a gas powered edger, three cell phones, workout equipment, high standing toolbox with tools, and something hidden under camouflage. Skeet throwers!

Ricky: Sometimes I don’t know about that boy. Sometimes he just ain’t right.

The duo took their four skeet throwers for appraisal. Lincoln brand high-quality. Condition like new and the thrower worked without a hitch. Valued at $500 apiece.

Kenny bought four storage units but it was Ricky and Bubba with one unit that hit the mark!

Please leave your thoughtful opinions in the comment box below.