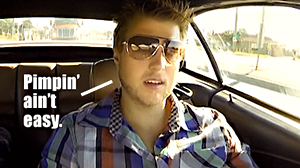 Okay. There were a few unprecedented underhanded maneuvers pulled off by the people you wouldn’t expect. So please pay attention.

Bogart had apparently cleaned up in a poker game the night previous. Paul asked if Bogart felt lucky about the day’s auction. He challenged Bogart to a ‘locker-off’. The loser of which would have to handle all the advertising for their store opening. Not – fun.  Bogart accepted the challenge.

And it was ON.

Cindy and Rick were feeling the hand of Lady Luck as well. A fortuneteller recently told them they’d be unstoppable on their next auction venture.

Roy wanted one of those fat commercial units this auction promised. But if his day didn’t go well, rest assured he would make everyone else’s go badly too.

Lately, Ursula’s online business had seen a lot of luck also. Her biggest sellers had been appliances. She kept her eyes opened for some sweet toasters and blenders.

Everyone’s interest was piqued.  Especially Cindy’s. She liked that bag. If it was the real deal, it was worth $$$$.

But Paul and Bogart were focused on their locker-off.  So much so, everyone around them was in danger of getting hit with shrapnel.

Paul: I’m gonna win this bet. But not by over-paying.

Like father, like son.  Bogart and Paul raised the price, but both dropped out when the bid hit $500.

Which let Rick and Cindy grab it from them.

Rick: Our fortuneteller did say we’d be unstoppable today.

What was found inside the locker?  Read on.  Because like we said: Today was topsy–turvy.

More household items, a couple of nice lamps… and a guitar.  Hm.

Roy and Bogart looked interested. But it was Ursula who grabbed it for $375.

She slipped away and  pulled everything out. She found another , much nicer electric guitar. But was it worth serious do-re-mi?  She needed to find out. So Ursula took it to a specialist.

Unfortunately, the 1959 replica she had found was only worth around $250.

Ursula: I guess that’s why they call it the blues.

Better luck next time, Ursula. Keep working those fingers and you’ll make it some day.

This baby was stuffed to the rafters with furniture.

Roy looked at it with hungry eyes, while neither Paul nor Bogart seemed to be feeling it.

But time was running out for them in their locker off.

So Roy and Bogart went at it. And when Bogart dropped out, a new bidder drove the price up further. And finally, when it looked like it was going to be Roy’s…

Bogart: What the heck just happened?!

Bogart knew at this point, he would lose no matter what.

Paul: Read ‘em and weep, kid. It’s the second mouse that gets the cheese.

But Bogart had one last ace up his sleeve.

And it was a doozy.

He offered Rick and Cindy $650 for Storage Unit #1 ($150 more than what they paid). And he would let them keep the designer bag from the locker Cindy wanted.

A flip of the coin raised the buying price to $675…  but the locker was Bogart’s.

Bogart was nice enough to help his old man unload his unit. (And in order to keep a record of its value).

Inside, were a few decent items.  But it looked like Paul was upside down on this one.

So they went to look through Bogart’s newly acquired unit. (Storage Unit #1) and found a very cool toy train set.

And what was inside?

Paul and Bogart grabbed their dough, gold, and train set and got the hell out of Dodge.

They visited a toy expert, (who shared the same fashion sense as Paul), who let them know the train set was worth around $600.

Bogart had won the bet big time… so it was now his dad’s turn to do the store’s advertising.

Which consisted of dressing in a gorilla suit and dancing on the street corner.

In a weird way, it made Bogart’s cutthroat approach to winning this bet more understandable.

Bogart fudged the details of his transaction with Rick and Cindy a little bit. What would you have done if all that gold and cash was staring you in the face?